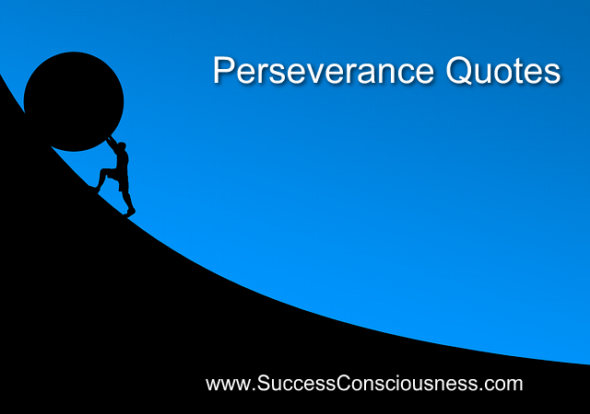 Perseverance and persistence are two important skills that are necessary in everyone’s life. They are the essential at school, college, career and work. They are important for the maintenance of good relationships, and a must for achieving success in business, sports, meditation and in any other area.

Here, you will find a a collection of quotes on perseverance. These quotes can help you understand the importance of these skills, and motivate you to possess them in case you lack them.

Reading these quotes, can awaken in you the strength to persevere and not give up when encountering difficulties, meeting obstacles, and when not motivated enough.

Read these quotes whenever you feel you need a dose of encouragement and motivation. They will encourage you and strengthen your determination to continue.

When you do not give up, eventually, you get results.

Perseverance Quotes and Quotes on not Giving Up

“Great works are performed not by strength but by perseverance.” –Samuel Johnson

“Patience and perseverance have a magical effect before which difficulties disappear and obstacles vanish.” –John Quincy Adams

“Just remember, you can do anything you set your mind to, but it takes action, perseverance, and facing your fears.” –Gillian Anderson

“Persist and persevere, and you will find most things that are attainable, possible.” –Lord Chesterfield

“Permanence, perseverance and persistence in spite of all obstacles, discouragements, and impossibilities: It is this, that in all things distinguishes the strong soul from the weak.” –Thomas Carlyle

“It’s not that I’m so smart, it’s just that I stay with problems longer.” –Albert Einstein

“Success seems to be largely a matter of hanging on after others have let go.” –William Feather

“It is not enough to start a project. You have also to continue and persevere, until you accomplish it.” –Remez Sasson

“Perseverance is like driving a bulldozer that moves on and on, removing all obstacles on the way.” –Remez Sasson

“What if I told you that 10 years from now, your life would be exactly the same? I doubt you’d be happy. So, why are you so afraid of change?” –Karen Salmansoh

“Persistence, determination and vision are the engines that takes you forward to any goal you choose.” –Remez Sasson

“If one dream should fall and break into a thousand pieces, never be afraid to pick one of those pieces up and begin again.” –Flavia Weedn

“Perseverance is a great element of success. If you only knock long enough and loud enough at the gate, you are sure to wake up somebody.” –Henry Wadsworth Longfellow

“Perseverance is the act of going all the way, from having an idea in the mind to making it a reality.” –Remez Sasson

“Let me tell you the secret that has led to my goal. My strength lies solely in my tenacity.” –Louis Pasteur

“Success is the sum of small efforts, repeated day in and day out.” –Robert Collier

“It is important to keep your enthusiasm at the start line, middle line, and at the finish line.” –Remez Sasson

“Develop success from failures. Discouragement and failure are two of the surest stepping stones to success.” –Dale Carnegie 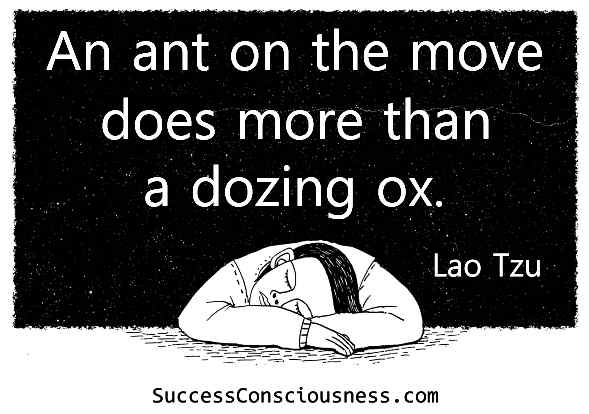 “An ant on the move does more than a dozing ox.” –Lao Tzu

“Defeat is not the worst of failures. Not to have tried is the true failure.” –George Edward Woodberry

“Success is the outcome of desire, vision, action and perseverance.” –Remez Sasson

“Whatever course you decide upon, there is always someone to tell you that you are wrong. There are always difficulties arising which tempt you to believe that your critics are right. To map out a course of action and follow it to an end requires courage.” –Ralph Waldo Emerson

“Act in a certain way over and again, and soon this action would become a habit.” –Remez Sasson

“Most accomplishments are preceded by persistence and perseverance.” –Remez Sasson

“To be a champ, you have to believe in yourself when nobody else will.” –Sugar Ray Robinson

“Nothing can stand in the way of a person who is self disciplined and possesses willpower.” –Remez Sasson

“Perseverance is failing 19 times and succeeding the 20th.” –Julie Andrews

“Tenacity of purpose and focusing on the goal are the signs of a great man or woman.” –Remez Sasson

“Keep on going, and the chances are that you will stumble on something, perhaps when you are least expecting it. I never heard of anyone ever stumbling on something sitting down.” –Charles F. Kettering

“Perseverance is like mighty river that flows towards the ocean, and which no obstacle can stop.” –Remez Sasson

“Failure is only the opportunity to begin again, this time more intelligently.” –Henry Ford

“Things happen to you to make you realize your true potential, strength, will power, and heart. You’ve got to have faith.” –Dr. Byron Hayes

“Learn from failure and then courageously start again. This will lead you to success.” –Remez Sasson

“If you keep moving toward your destination, you will eventually arrive there.” –Remez Sasson

“Never give up on what you really want to do. The person with big dreams is more powerful than the one with all the facts.” –H. Jackson Brown, Jr.

“If something doesn’t work out as expected or planned today, it will work out tomorrow, if you are determined enough.” –Remez Sasson

“Those who do not give up are the ones who get results.” –Remez Sasson

“Success seems to be connected with action. Successful men keep moving. They make mistakes, but they don’t quit.” –Conrad Hilton

“You don’t become an expert in one day, it is a process that takes time and effort.” –Remez Sasson

“Perseverance is the secret ingredient of accomplishment.” –Remez Sasson

“Failure is not a reason to give up, but to go on and try again.” –Remez Sasson

“To go straight on, not heeding obstacles and failure is a sign of inner strength.” –Remez Sasson

“Decide what you want to achieve, and then work diligently and fearlessly to achieve it. Persevere with your efforts and results will appear.” –Remez Sasson

“Perseverance is composed of patience, willpower, self discipline and self control.” –Remez Sasson

“Many of life’s failures are people who did not realize how close they were to success when they gave up.” –Thomas Edison

“I am a slow walker, but I never walk back.” –Abraham Lincoln

“To accomplish anything, one must never give up in the face of obstacles or failures.” –Remez Sasson

“The difference between a successful person and others is not a lack of strength, not a lack of knowledge, but rather a lack in will.” –Vince Lombardi Jr.

“The person who never gives up is that person that achieves success.” –Remez Sasson

Perseverance Quotes for not Giving up

Achievement, improvement and progress require tenacity of purpose, determination and not giving up. This might be tough, but if you do not give up when encountering difficulties and obstacles, eventually, you will win.

Always persevere with what you are doing. This will make you a tenacious and determined person, and will lead you to the achievement of your plans and dreams.

Here is a collection of quotes on not giving up.

“Never give up on something you believe in.” –Steve Scalise

“Never give up your desire to be what you want to be. Stay focused, persistent and relentless.” –Debasish Mridha MD

“Your victory is right around the corner. Never give up.” –Nicki Minaj

“Not giving up is the essence of perseverance.” –Remez Sasson

“That’s what is incredible about human beings, is the choice to keep going.” –Jack Antonoff

“Our greatest weakness lies in giving up. The most certain way to succeed is always to try just one more time.” –Thomas Edison

“How can you get anything in life if you give up easily? If you fail or encounter an obstacle, do not give up. Continue with your efforts and you will find the way to success.” –Remez Sasson

“You’re a fighter. Look at everything you’ve overcome. Don’t give up now.” –Olivia Benson

“Never give up too soon, and when you decide to give up, try again before quitting.” –Remez Sasson

“Don’t give up. There are too many nay-sayers out there who will try to discourage you. Don’t listen to them. The only one who can make you give up is yourself.” –Sidney Sheldon

“Do not give up when facing difficulties, and soon, you will be able to overcome every obstacle that stands in your way.” –Remez Sasson