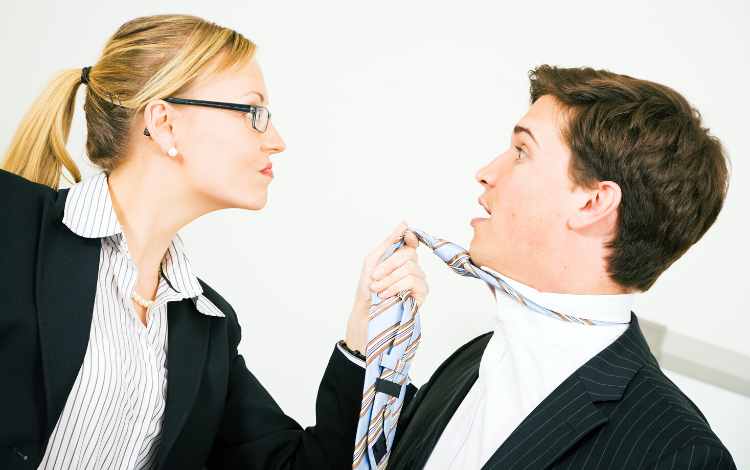 It’s no secret that the world is constantly flooded with negativity.

Whether it comes from a co-worker, a family member or even a stranger, it can often be so overwhelming that it makes you question every little thing about yourself.

It’s easy to get swept away by all of the negative talk and feel like you can’t do anything right. But how do you cope when these people start telling you how to improve?

Often, people don’t have anything nice to say about others unless they want something from them.

But what if this criticism was actually valid? How do you keep your cool when someone points out things that could be fixed? Read on to find out.

How to Stay Calm and Poised When You’re Criticized

Yes, it is possible, in a smaller or bigger degree. This depends on your earnestness and efforts, and on some other factors.

It is most important, no matter how hard it is, not to take personally whatever people say.

You are not responsible for other people’s words and opinions.

You cannot prevent people from thinking or talking, but you can ignore their comments. If you don’t, you are playing into their hands.

If you take things personally, you allow yourself to get hurt. If you allow other people’s words to affect you, you allow them to play with your feelings and thoughts, and you certainly don’t want that.

Tips to Stay Calm and Poised When You’re Criticized

Here are 7 tips on how to stay calm and poised when you’re criticized. Read them, think about them, and try to implement them in your everyday life.

It is a process that takes time, so be patient and do not give up.

It’s always a good idea to remember that people don’t always mean what they seem to mean.

Sometimes, people don’t know how to talk to others without hurting their feelings.

In many cases, the person who is criticizing you wants you to improve, not to feel bad about yourself. When someone is telling you where you could improve, they are simply trying to help you.

If you take the criticism personally, you run the risk of being defensive. You might even start judging the person who criticized you.

While you should definitely reflect on the criticism, don’t let it affect your behavior towards the person who gave it to you.

When someone criticizes you, it’s easy to get offended and get caught up in how they are saying things. But remember that the critic is not a bad person.

There might be tons of things they don’t like about you, because you aren’t their cup of tea. But that’s okay. You can’t expect all people to like everything about you.

Keep in mind that everyone has something they wish they could change about themselves. It’s just that they don’t tell anyone about it.

If you let the negativity affect how you view the person who is criticizing you, you might even start resenting them. When someone comes at you with criticism, try to evaluate it from an objective perspective.

Remember that the person criticizing you might have some valid points. Try to take the criticism from a more detached perspective.

Take a Breath and Relax

Criticism is a part of life, but it doesn’t have to be something that stresses you out! When you hear someone criticize you, take a breath and try to relax.

It’s normal to feel upset and annoyed, but you don’t have to let it get the best of you.

When you feel you are getting offended, and start yelling at the person who criticized you, try to take a breath, take a step back and remember that they most likely didn’t mean to offend you.

When you’re calming down and taking a breath, you can also be thinking about what you want to say. In most cases, you don’t have to respond to every bit of criticism you receive.

Related article: 7 Reasons Why You Shouldn’t Be Offended by What People Say.

Don’t Get Angry and Do not Retort Impulsively

Criticism is sometimes a two-way street. The person who is criticizing you, might be hoping to receive some constructive feedback, even though they might not admit it.

There’s nothing wrong with that. In fact, it shows that the person is interested in doing something better. You don’t have to respond to every negative thing that you hear, but you also don’t have to let it slide.

If someone says something that you wish they hadn’t, don’t get angry and retort impulsively. Wait a moment and consider the situation before responding.

“Anger is an acid that can do more harm to the vessel in which it is stored than to anything on which it is poured.”
– Mark Twain

Have a Sit Down and Reflect

If someone says something that you don’t understand or that you wish they hadn’t said, have a sit down and reflect. Take the time to think about what the person who criticized you was trying to accomplish.

You don’t have to agree with their point, but you do have to take their criticism seriously.

No one is perfect, and everyone has things that they wish they could change about themselves. Try to be analytical about the criticism you are receiving. If you find truth in what they say, start thinking how you can improve.

Often, criticism can help you improve yourself if you accept it calmly and reflect about it.

Stay Focused on the Task at Hand

When someone is criticizing you, try to stay focused on the task at hand. Remember that criticism is something you don’t have to respond to, but it is something that you can work on improving.

If you let the criticism overwhelm you, you will not be able to make any progress.

You don’t have to respond to every criticism that you receive, but you can always take it with a grain of salt and work on improving yourself.

Be Proactive in Your Next Encounter

If someone is criticizing you, try to be proactive in your next encounter.

Do not allow the other person to rule the conversation. If you believe the criticism is not justified, be firm and do not talk in an apologetic tone.

Criticism can be difficult to deal with, but it’s something that can help you improve.

When someone is criticizing you, don’t take it personally, try to stay objective. Take a breath, relax, and don’t get angry.

Try to evaluate the criticism from an objective perspective and remember that they might have some valid points.

Try to take the criticism from a more detached perspective and remember that no one is perfect, and everyone has things that they wish they could change about themselves.

Always try to stay focused on the task at hand and be proactive when dealing with the criticism. Try to change the subject if the other person is criticizing you too much.