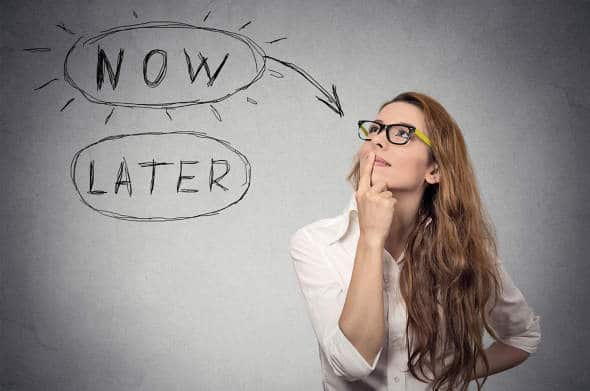 Procrastinators delay until the day after tomorrow what they know they should have done the day before yesterday.

We all put off working on unpleasant or tedious tasks from time to time.

Washing the car, taking out garbage, cleaning windows, or making stressful phone calls are no one’s idea of a fun way to spend time.

But where most of us do this only occasionally, procrastinators do it most of the time, and that’s where the problems start.

Procrastination Is a Stress Factor

Procrastination is a behavior that leads to stress, because it makes plans and wishes fail at what should be the point of fulfillment.

Theater tickets and vacation packages sell out before procrastinators get around to calling. Planes take off, deadlines pass, jobs go to other applicants–the ones who got their resumes in on time.

The Procrastination Research Group at Carleton University in Canada did an online survey. They received 2,700 responses to the question, “To what extent is procrastination having a negative impact on your happiness?”

Almost one person in two (46%) said “quite a bit” or “very much,” and around one person in five (18%) reported an “extreme negative effect.”

Though procrastination is often trivialized, procrastinators suffer when their careers crash or when they otherwise fail to reach their potential.

Long term and wide scale, “the big P” can become more than just a threat to personal health, happiness, and productivity of individuals: it can carry that threat into our companies and communities.

Traits of the Procrastinators

How can you spot a chronic procrastinator?

Procrastinators avoid revealing information about their abilities, they make poor time estimates, they tend to focus on the past and do not act on their intentions, they may also prefer service jobs.

There Are No Easy Answers

There are no easy “buck up” answers, though. As Joseph Ferrari, professor of psychology at DePaul University in Chicago says: “It’s not about time management.

To tell a chronic procrastinator to ‘Just Do It’ is like telling a clinically depressed person to cheer up.” We need to look at the kind of procrastination people practice to understand the reason they do it and find the appropriate cure.

Why Do People Procrastinate?

Take your pick! Ferrari found that some procrastinators had particularly authoritarian fathers. He sees the p-habit as a continuing rebellion against those demands.

Others lay the blame on strong parents who don’t leave their children room to develop initiative.

Clary Lay of York University, Toronto, creator of the General Procrastination Scale, takes a different tack and believes that procrastinators think and act in terms of “wishes and dreams”, while people who do not procrastinate get on with “oughts and obligations.” He says, “Procrastinators are also neurotically disorganized in their thinking, making them forgetful and less likely to plan well.”

How Do People Procrastinate?

Behavioral procrastination is a self-sabotage strategy that allows people to shift blame and avoid action, for example: a student may do poorly in an exam and use procrastination as an excuse.

“They’d rather create the impression that they lacked effort than ability,” says Ferrari. “They can blame their failure on the lack of time.”

Ferrari also thinks that procrastinators suffer from low esteem and self-doubt and worry about how other people judge their abilities. “Procrastinators view their self-worth as based on ability,” he says. So according to their logic, “If I never finish the task, you can never judge my ability.”

Prolonged procrastination and failure to perform adequately creates a cycle of self-defeating behavior, which results in a downward spiral of self-esteem. Self-inflicted degradation and shame of this kind often translates into stress and (mental) health problems at some point.

The decisional procrastination strategy is to put off making a decision when dealing with conflicts or choices.

People who practice high level decisional procrastination tend to be afraid of errors and are likely to be perfectionists. These procrastinators seek out more and more information about alternatives before attempting to make a decision, if they make one at all.

Overinformed decisional procrastinators run the danger of falling prey to a further self-sabotage strategy, called optional paralysis: they create so many choices for themselves that they feel unable to choose, for fear of choosing an option that is less than perfect.

Insight is the first step to change.

Understanding is the second step. After that, a course of behavior modification therapy may help, especially if procrastination is causing serious problems in connection with work and relationships.

Though there is no Band-Aid solution for procrastination, anything that helps procrastinators take concrete steps goes a long way to re-building a healthy level of achievement and self-esteem and helping them feel better about themselves.

The author, Susan J. Letham, is a British writer and creative writing tutor.