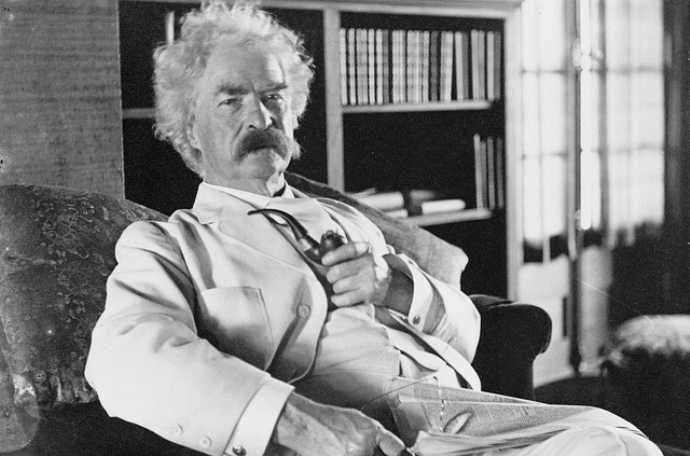 Mark Twain quotes are known for their wit and humor. Some of them are funny and sarcastic.

Mark Twain was born in 1835 as Samuel Langhorne Clemens, in Missouri, U.S.A. He was an American author, humorist, publisher and lecturer, known for his witty approach to life.

Among the works of Mark Twain are the well known books, “The Adventures of Tom Sawyer” and “Adventures of Huckleberry Finn”.

Here are a few of the witty, insightful and inspiring Mark Twain quotes.

“Whenever you find yourself on the side of the majority, it is time to pause and reflect.”

“Never put off till tomorrow what you can do the day after tomorrow.”

“Anger is an acid that can do more harm to the vessel in which it is stored than to anything on which it is poured.”

“A banker is a fellow who lends you his umbrella when the sun is shining, but wants it back the minute it begins to rain.”

“Get your facts first, then you can distort them as you please.”

“Nothing so needs reforming as other people’s habits.”

“The right word may be effective, but no word was ever as effective as a rightly timed pause.”

“It is better to deserve honors and not have them than to have them and not deserve them.”

“A man’s character may be learned from the adjectives which he habitually uses in conversation.”

“Good breeding consists in concealing how much we think of ourselves and how little we think of the other person.”

“The more things are forbidden, the more popular they become.”

“If all men knew what each said of the other, there would not be four friends in the world.”

“It is better to have old second-hand diamonds than none at all.”

“Let us make a special effort to stop communicating with each other, so we can have some conversation.”

“Keep away from people who try to belittle your ambitions. Small people always do that, but the really great make you feel that you, too, can become great.”

“Always do what is right. It will gratify half of mankind and astound the other.”

“With courage you will dare to take risks, have the strength to be compassionate, and the wisdom to be humble. Courage is the foundation of integrity.”

“I can teach anybody how to get what they want out of life. The problem is that I can’t find anybody who can tell me what they want.”

“I was seldom able to see an opportunity until it had ceased to be one.”

“Do something every day that you don’t want to do; this is the golden rule for acquiring the habit of doing your duty without pain.”

“Don’t part with your illusions. When they are gone you may still exist, but you have ceased to live.”

“A man cannot be comfortable without his own approval.”

“Many a small thing has been made large by the right kind of advertising.”

“Age is an issue of mind over matter. If you don’t mind, it doesn’t matter.”

“I have never taken any exercise except sleeping and resting.”

“Man is the only animal that deals in that atrocity of atrocities War. He is the only one that gathers his brethren about him and goes forth in cold blood and calm pulse to exterminate his kind.”

“The fear of death follows from the fear of life. A man who lives fully is prepared to die at any time.”

“It is better to keep your mouth closed and let people think you are a fool than to open it and remove all doubt.”

“To get the full value of joy you must have someone to divide it with.”

“The best way to cheer yourself up is to try to cheer somebody else up.”

“Humor is the great thing, the saving thing. The minute it crops up, all our irritations and resentments slip away and a sunny spirit takes their place.”

“A person with a new idea is a crank until the idea succeeds.”

“Give every day the chance to become the most beautiful of your life.”