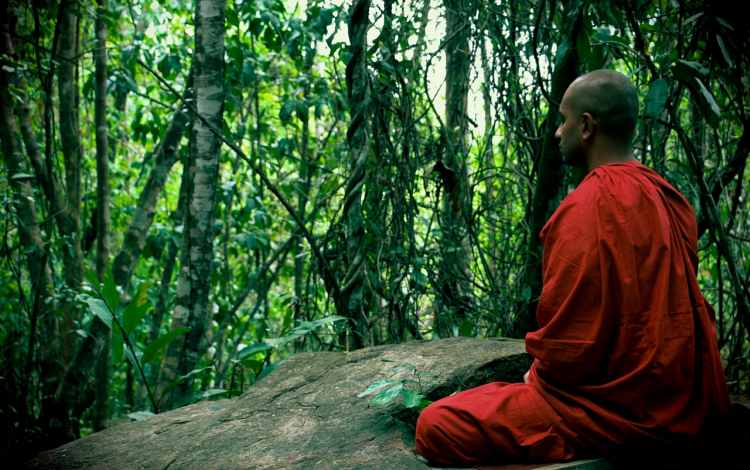 A long time ago, there were two swamis (monks), who lived in two neighboring caves.

The Swamis spent most of their time in deep meditation, except the time they ate or were visited by devotees.

The people who came to visit them revered the two swamis, and loved listening to their teachings and advice. They always felt peaceful and happy when near them, a feeling that continued, even after they went away.

One cave was dark, as caves usually are, but in the other one, sometimes, there was a peculiar golden light illuminating the cave. It was not strong, but enough to be noticed and to illuminate the cave.

Being in the company of the swamis aroused calmness and peace in the visitors. Their minds slowed their nonstop chatter, and they experienced a pleasant inner peace and happiness.

Though the visitors admired both swamis, they believed that the one living in the illuminated cave possessed supernatural powers and was more advanced. He certainly appeared to them as a mysterious person.

One day, a great and well-known sage arrived to a nearby village. One of the villagers came to him and said:
“Great master, we have a question to ask. There is a mystery which you might solve for us.”

“I will be glad to help you, if I can.” Answered the sage.

“There are two swamis living here on the hill…”, the villager started to recount.

Click Here to Discover How to Let Go and Be Happy

“Yes, I know,” the sage interrupted him, “and you want to know about the light in the cave.”

“Yes, that is true,” the villager responded, “It is something that has been a riddle for us. Can you please tell us also, if the swami in the lighted cave is more advanced, and if he really possess supernatural powers?”

“Pay attention to your inner self and not to the external phenomena. “The sage said, and continued, “The outside world always changes, but the inner self does not.”

“When in the presence of a teacher, listen to what he says and be aware of the influence of his words on you. Watch yourself, and see whether under his influence you become calmer and more peaceful, and whether your thoughts, at least for a while, slow down their mad race.”

“Yes, I’ll do so,” said the villager, “but please enlightens us on the mysterious light.”

The sage sat down, and started to explain:
“Sometimes, when one works intensively on the spiritual path, and concentrates and meditates a lot, various phenomena may occur around him, such as lights, sounds or visions. This is not supernatural. The mind has a creative power, and when concentrated, can produce various phenomena even unintentionally.”

“This does not mean that one is more advanced than the other. Not all minds produce these things. Some do, and some don’t.”

“Some of the people who produce these lights may be aware of the light, and others might not. This depends on their psychic sensitivity.

So it is also with the people who watch them. Not all see this light. In any case, it has nothing to do with whether one swami is more advanced or less advanced than the other one.”

“Thank you great master, you have solved us this great mystery.” Exclaimed the devotees of the swamis, who were standing by, deeply relieved and happy to understand the mystery that has been bewildering them for a long time.

Click Here to Discover How to Let Go and Be Happy

Remez Sasson is the author and creator of Success Consciousness website. He is the author of books and articles that motivate and help people to improve their life, achieve success, gain inner strength and inner peace, and become more positive and happy.

Calm Down Your Mind