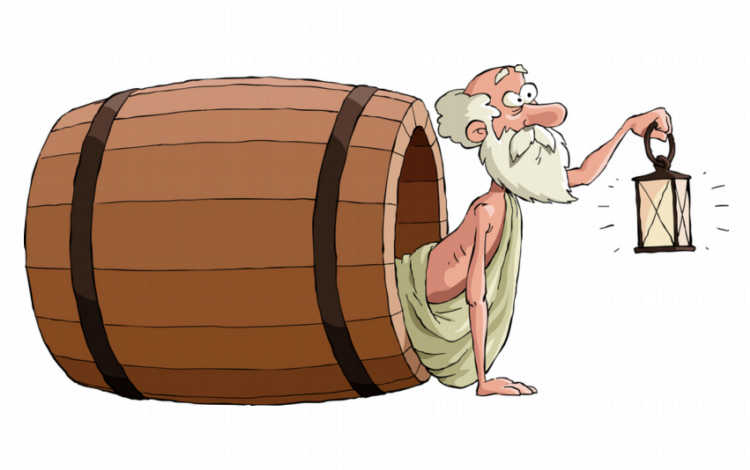 A collection of Diogenes quotes and sayings.

Diogenes, also called Diogenes of Sinope, was a Greek philosopher, and one of the founders of the Cynic philosophy, a Greek philosophical sect that stressed stoic self-sufficiency and the rejection of luxury.

Diogenes behavior and philosophical thoughts made him very popular, even though he came from a poor background.

“I have nothing to ask but that you would remove to the other side, that you may not, by intercepting the sunshine, take from me what you cannot give.”

“The art of being a slave is to rule one’s master.”

“We have two ears and one tongue so that we would listen more and talk less.”

“People who talk well but do nothing are like musical instruments; the sound is all they have to offer.”

“I am not an Athenian or a Greek, but a citizen of the world.”

“You will become a teacher of yourself when for the same things that you blame others, you also blame yourself.”

“I know nothing, except the fact of my ignorance.”

“The foundation of every state is the education of its youth.”

“Blushing is the color of virtue.”

“There is only a finger’s difference between a wise man and a fool.”

“As a matter of self-preservation, a man needs good friends or ardent enemies, for the former instruct him and the latter take him to task.”

“The health and vigor necessary for the practice of what is good, depend equally on both mind and body.”

“Even if I am but a pretender to wisdom, that in itself is philosophy.”

“If I gained one thing from philosophy is that at the very least, I am well prepared to confront any change in fortune.”

“It is the privilege of the gods to want nothing, and of godlike men to want little.”

“He has the most who is most content with the least.”

“Wise leaders generally have wise counselors because it takes a wise person themselves to distinguish them.”

“Virtue cannot dwell with wealth either in a city or in a house.”

“Other dogs bite only their enemies, whereas I bite also my friends in order to save them.”

“Modesty is the color of virtue.”

“If I lack awareness, then why should I care what happens to me when I am dead?”

“If you are to be kept right, you must possess either good friends or red-hot enemies. The one will warn you, the other will expose you.”

“Why not whip the teacher when the pupil misbehaves?”

“The mob is the mother of tyrants.”

“Once he saw the officials of a temple leading away some one who had stolen a bowl belonging to the treasurers, and said, “The great thieves are leading away the little thief.”

“The vine bears three kinds of grapes: the first of pleasure, the second of intoxication, the third of disgust.”

“We are more curious about the meaning of dreams than about things we see when awake.”

“Those who have virtue always in their mouths, and neglect it in practice, are like a harp, which emits a sound pleasing to others, while itself is insensible of the music.”

“When some one reminded him that the people of Sinope had sentenced him to exile , he said, ‘And I sentenced them to stay at home’.”

“Wise kings generally have wise counselors; and he must be a wise man himself who is capable of distinguishing one.”

Some Facts about Diogenes

What were Diogenes beliefs?
Diogenes believed in self-control and in the importance of personal excellence. He also believed in the rejection of what he considered unnecessary in life, such as personal possessions and social status.

Since he was ardent in his beliefs, he lived according to them, owning nothing. It is said that he took up residence in a large wine cask and seems to have lived off the charity of others.

What is Diogenes known for?
Diogenes is best known for holding a lantern (or candle) to the faces of the citizens of Athens claiming he was searching for an honest man.