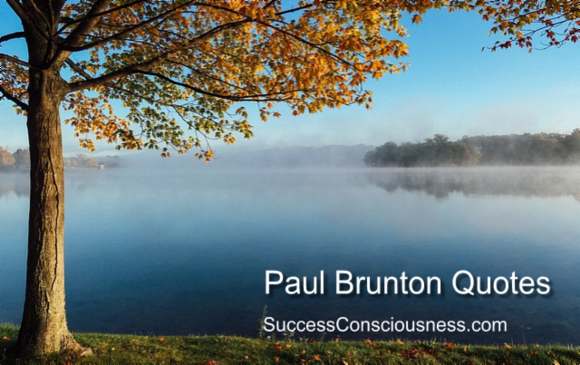 Paul Brunton was the pen name of Raphael Hurst (21 October 1898 – July 27 1981). He was a British journalist, author, philosopher, mystic and traveler.

In 1930, Raphael Hurst (Paul Brunton) embarked on a voyage to India, which brought him into contact with Indian spiritual teachers, such as Meher Baba, Vishuddhananda Paramahansa, Paramacharya of Kancheepuram and Ramana Maharshi.

After his journey, he published the book “A Search in Secret India” under the name Paul Brunton, which he continued to use as his pen in his other books.

“All thoughts can be traced back to a single thought which rests at the very base of their operations. Can you not see now that the thought of personality, the sense of ‘I,’ is such a basic thought?”

“Solitude is strength; to depend on the presence of the crowd is weakness. The man who needs a mob to nerve him is much more alone than he imagines.”

“Worry is spiritual short sight. Its cure is intelligent faith.”

“That which claims to be the “I” turns out to be only a part of it, the lesser part, and not the real “I” at all. It is a complex of thoughts.”

“We are but fragments of mind thrown into momentary consciousness.”

“The longing for peace may be kept inside a man for many years, repressed and ignored, but in the end it has to come out.”

“Nothing matters so much that we should throw ourselves into a state of panic about it. No happening is so important that we should let ourselves be exiled from inner peace and mental calm for its sake.”

“The mind has the power to externalize the very thing it perceives.”

“It is good for anyone to keep one little corner of hi house or his room for recollection. It may be furnished and decorated appropriately to this purpose. It becomes a reminder of what he really is and what he ought to do.”

“Consciousness beyond the usual everyday consciousness can be reached only after a disciplined training of the mind. This suppresses its activity in thinking and banishes its extroverted worldliness of character.”

“Contemplation is a deeper stage: no thinking is involved in it.”

“A man may live on the surface of life or in the divine depths of being beneath his ego’s sub-surface. It is for him to make the effort, dive again and again until there is contact.”

“The seeker after stillness should be told that the stillness is always there. Indeed, it is in every man. But he has to learn, first, to let it in and, second, how to do so. The first beginning of this is to remember. The second is to recognize the inward pull. For the rest, the stillness itself will guide and lead him to itself.”

“Cultivate calmness; try to keep the balance of your mind from being upset.”

“You may eradicate as many prejudices and eliminate as many illusions as you wish or can, but if their source–the ego–still remains, new ones will spring up to take their place.”

“So long as the little self feels itself wise enough to make all its decisions and solve all its problems, so long will there be a barrier between it and the Higher Power.”

– You are reading Paul Brunton quotes –

“What we are is what we are conscious of. The mind makes its own reality. Consciousness is king.”

“So long as thoughts remain unmastered, this present and personal experience shuts us out from reality.”

“When every situation which life can offer is turned to the profit of spiritual growth, no situation can really be a bad one.”

“Solitude is strength; to depend on the presence of the crowd is weakness. The man who needs a mob to nerve him is much more alone than he imagines.”

“When you have trained yourself to empty your consciousness of its thoughts at will, your worries will naturally be emptied along with them. This is one of the valuable practical fruits of yoga.”

“The first way of finding peace when harassed by a hard problem or situation is to turn away from the tumult of thoughts and look for the still center within.”

“Meditation must become a daily rite, a part of the regime which is, like lunch or dinner, not to be missed, but regarded with a sacredness the body’s feeding does not have.”

“Imagine and believe that the Master is here in your room, sitting in his accustomed chair or position. Then behave and meditate, as you would do if in his presence.”

“Most forms of occupying leisure periods ease either the pace or stress of life by relaxing a part of the brain, the instrument of thought; or a part of the body, those muscles and organs most used; or the emotions and passional nature; but the deeper kind of meditation brings peace to a man’s whole being.”

“When it seems humanly impossible to do more in a difficult situation, surrender yourself to the inner silence and thereafter wait for a sign of obvious guidance or for a renewal of inner strength.”

“Every test successfully met is rewarded by some growth in intuitive knowledge, strengthening of character, or initiation into a higher consciousness.”

“That deep silence has a melody of its own, a sweetness unknown amid the harsh discords of the world’s sounds.”

“If we can train the mind to be still, it will clear itself of muddy thoughts and let the Soul’s light shine through.”

If you likes this page and quotes, we would appreciate if you link to this page or share it.