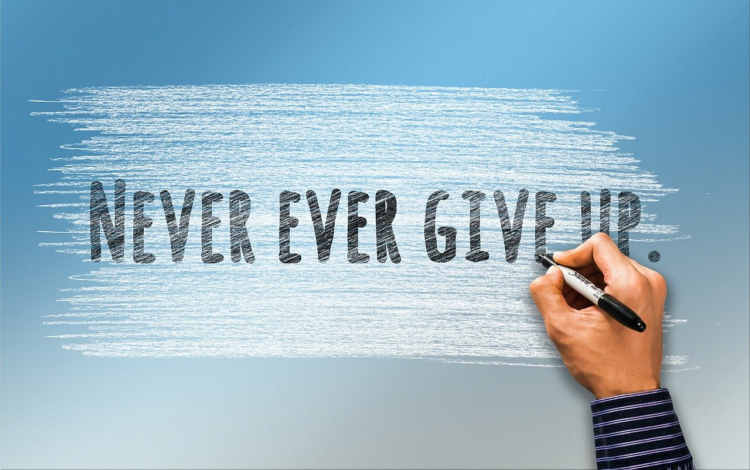 Problems, obstacles and difficulties are part of everyone’s life. Running away from them does not solve anything and can only add to the frustration and fear. The best solution is not to give up.

If you do not give up and keep going on, eventually, you will reach your destination.

Reject these thoughts and feelings of surrender and focus on going forward, no matter how tough this might be. You will overcome these weak moments that make you consider giving up.

It is normal to have doubts or feel tired, frustrated or disappointed, but you should not give in to these thoughts and feelings. This is the time to motivate yourself, raise up and continue going forward. Reading a few quotes about never giving up can help you keep getting up and going on.

Here, you will find the words of people that stayed strong in the face of doubts and struggles, and won. You can win too, in any area of life, if you persevere and do not consider giving up as an option.

Read the quotes about not giving up, and let them motivate and inspire you to keep going forward.

Quotes about not Giving Up

“It is a common experience that a problem difficult at night is resolved in the morning after the committee of sleep has worked on it.” – John Steinbeck

“Never give up on something you believe in.” – Steve Scalise

“There is no substitute for hard work. Never give up. Never stop believing. Never stop fighting.” – Hope Hicks

“Survival can be summed up in three words – never give up. That’s the heart of it really. Just keep trying.” – Bear Grylls

“It’s not that I’m so smart, it’s just that I stay with problems longer.” – Albert Einstein

“It is impossible to live without failing at something, unless you live so cautiously that you might as well not have lived at all, in which case you have failed by default.” – J.K. Rowling

“When I was young, I observed that nine out of ten things I did were failures. So I did ten times more work.” – George Bernard Shaw

“Never give up on what you really want to do. The person with big dreams is more powerful than the one with all the facts.” – H. Jackson Brown, Jr.

“The jump is so frightening between where I am and where I want to be. Because of all I may become, I will close my eyes and leap.” – Mary Anne Radmacher

“Never give up, for that is just the place and time that the tide will turn.” – Harriet Beecher Stowe

“Believe in yourself and believe in your dreams. Follow them, never give up, that’s the most important thing. If you believe you can get there, then one day you will.” – Joao Moutinho

“Always remind yourself that there is a great source of power within you that can take you anywhere you want.” – Remez Sasson

More Quotes on not Giving Up

“It does not matter how slowly you go so long as you do not stop.” – Confucius

“Your victory is right around the corner. Never give up.” – Nicki Minaj

“I will keep smiling, be positive and never give up! I will give 100 percent each time I play. These are always my goals and my attitude.” – Yani Tseng

“It’s hard to beat a person who never gives up.” – Babe Ruth

“At any given moment you have the power to say: This is not how the story is going to end.” – Christine Mason Miller

“Reject your doubts and inner resistance, despite obstacles and difficulties, and you will eventually reach your goal.” – Remez Sasson

“You do what you can for as long as you can, and when you finally can’t, you do the next best thing. You back up but you don’t give up.” – Chuck Yeager

“If you fall behind, run faster. Never give up, never surrender, and rise up against the odds.” – Jesse Jackson

“Success seems to be largely a matter of hanging on after others have let go.” – William Feather

“Perseverance is not a long race; it is many short races one after the other.” – Walter Elliot

More Never Give Up Quotes

“Most of the important things in the world have been accomplished by people who have kept on trying when there seemed to be no hope at all.” – Dale Carnegie

“To be a champ, you have to believe in yourself when nobody else will.” – Sugar Ray Robinson

“Strength does not come from winning. Your struggles develop your strengths. When you go through hardships and decide not to surrender, that is strength.” – Arnold Schwarzenegger

“Failure will never overtake me if my determination to succeed is strong enough.” – Og Mandino

“Never give up on a dream just because of the time it will take to accomplish it. The time will pass anyway.” – Earl Nightingale

“When everything seems to be going against you, remember that the airplane takes off against the wind, not with it.” – Henry Ford

“Go out into the world with your passion and love for what you do, and just never give up.” – Dianne Reeves

“Work hard, be honest, help people, never give up, love your fellow man and woman, give back to society, and don’t ever discriminate.” – Jesse White

“Never give up and don’t ask why because every situation does not need an answer. I’m a firm believer that I don’t worry about anything I can’t control.” – Eric Davis

“No one has the power to shatter your dreams unless you give it to them.” – Maeve Greyson

“In times of great stress or adversity, it’s always best to keep busy, to plow your anger and your energy into something positive.” – Lee Iacocca

Never give up on the fight until you win the belt.” – Israelmore Ayivor

Our greatest weakness lies in giving up. The most certain way to succeed is always to try just one more time.” – Thomas A. Edison

“Failure is only the opportunity to begin again, this time more intelligently.” – Henry Ford

“Let me tell you the secret that has led to my goal. My strength lies solely on my tenacity.” – Louis Pasteur

“Tenacity is the key to success with everything you do, learning a new skill, improving your life, building a business or learning to meditate.” – Remez Sasson

“Circumstances don’t defeat you — you defeat yourself when you give up.” – Jonathan Lockwood Huie

When you do not give up you become a winner.

Reject your doubts and inner resistance, despite obstacles and difficulties, and you will eventually reach your goal.

People often give up at the first obstacle they face. This either means that they are pursuing a goal that they do not really care about, or that they lack confidence and perseverance.

People who achieved success passed through difficulties, but they did not lose heart. They continued despite the obstacles they faced.

The habit of never giving up can be cultivated by developing willpower self-discipline and perseverance.

Do not fear leaving your comfort zone, taking action and trying new ways of reaching your objectives.