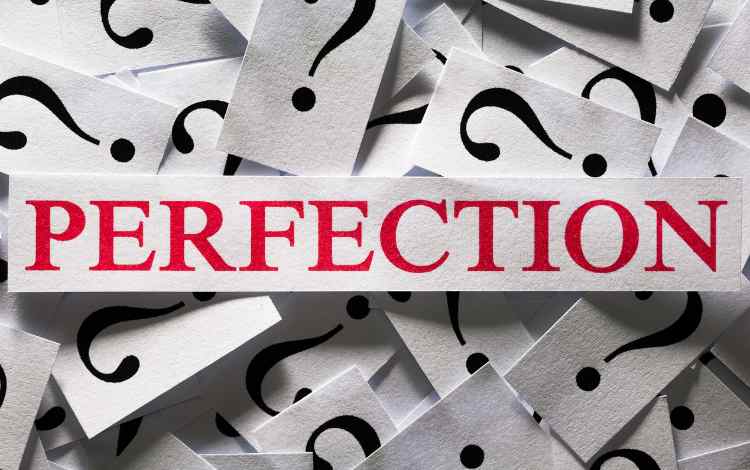 Would anyone seriously argue with the saying nobody’s perfect ? Of course not.

And yet throughout the world millions of otherwise sane and intelligent people saddle themselves with a life principle that dooms them to frustration and constant disappointment – the desire to do things perfectly.

You could argue that setting such high standards is good for you, leading naturally to always being at your best. Many people do just that with proud statements like: oh yes, I’m a bit of a perfectionist – achieving anything but the absolute best is failure in my book.

Far from leading to happiness and achievement such attitudes are instead deeply negative.

Here are five reasons why:

1. It Leads to a Constant Sense of Failure.

Perfection is a vanishingly rare occurrence and perfectionists tend to focus on the flaws rather than the achievement. So no matter how well a task is done, there is always a sense of failure that it wasn’t done even better.

An example is the golfer who hits a stunning shot to within a few feet of the pin but feels disappointed with himself for not getting it even closer.

2. It Leads to Procrastination and Lowered Output.

Put at its simplest – if your subconscious knows that starting on a project is going to be proof that you aren’t good enough, where’s the incentive to get moving?

And when you are finally making progress it becomes difficult to finish until it really is the best it can be. Result: missed deadlines and a process of achievement full of terror and pain.

3. It Leads to Missed Opportunities.

That’s because perfectionists will often be waiting for exactly the ‘right’ time to start – and guess what – now is never it. There’s the old joke about the motorist stopping to ask directions only to be told ‘oh, I wouldn’t start from here if I were you.’

It pretty much sums up the perfectionist attitude to opportunities.

4. It Screws up Your Kids

If you want to transfer your own feelings of perfectionist inadequacy to your kids, then focus on the stuff they get wrong rather than what they do right. Imagine the pressure on a child knowing that only perfection is good enough.

5. It Stops You Learning from Your Mistakes

One side effect of a perfectionist attitude is a terror of making mistakes. Mistakes equate with failure to a perfectionist. So either you don’t acknowledge and learn from your mistakes or you simply don’t make them.

But the only way not to make mistakes is to limit what you do – thus limiting yourself and your growth as a person. The perfectionist paradox strikes again.

Every perfectionist I’ve ever met believed that being a perfectionist was hard-wired into their personality – the only way they could ever be.

The good news is that it’s not true; you can Escape the Perfectionist Trap – and in so doing improve your self esteem, your belief in yourself and your ability to achieve.