A collection of Edgar Allan Poe quotes about life, dreams, love and more.

Edgar Allan Poe was an American writer, poet, editor, and literary critic. He was born in Boston, Massachusetts, on January 19 1809, and died in 1849.

Edgar Allan Poe is best known for his poetry, short stories, and tales of mystery and the macabre. Though living a short life, he has left a remarkable literary legacy of poems.

His stories were mainly stories of mystery and imagination, often employing the macabre. Poe and his works influenced literature around the world, as well as specialized fields such as cosmology and cryptography.

He had a life a difficult life and used writing like a medicine that helped him stay sane.

Edgar Allan Poe quotes on this page will give you some understanding of his mind and of his writings.

“Beauty is the sole legitimate province of the poem.”

“Literature is the most noble of professions. In fact, it is about the only one fit for a man. For my own part, there is no seducing me from the path.” 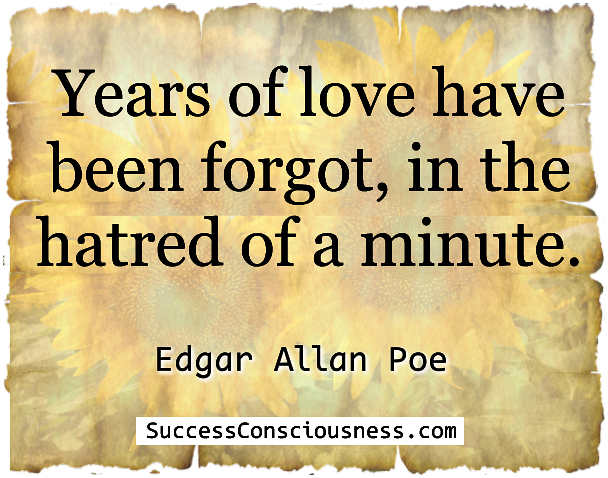 “Years of love have been forgot, in the hatred of a minute.”

“I dread the events of the future, not in themselves but in their results.”

“Words have no power to impress the mind without the exquisite horror of their reality.”

“It is by no means an irrational fancy that, in a future existence, we shall look upon what we think our present existence, as a dream.”

“The nose of a mob is its imagination. By this, at any time, it can be quietly led.”

“Experience has shown, and a true philosophy will always show, that a vast, perhaps the larger portion of the truth arises from the seemingly irrelevant.”

“Happiness is not to be found in knowledge, but in the acquisition of knowledge.”

“The customs of the world are so many conventional follies.”

“I remained too much inside my head and ended up losing my mind.”

“We loved with a love that was more than love.”

“In the Heaven’s above, the angels, whispering to one another, can find, among their burning terms of love, none so devotional as that of ‘Mother.”

“Thy grace, thy more than beauty, shall be an endless theme of praise, and love—a simple duty.”

“A short story must have a single mood and every sentence must build towards it.” –Edgar Allan Poe

“A million candles have burned themselves out. Still I read on.” 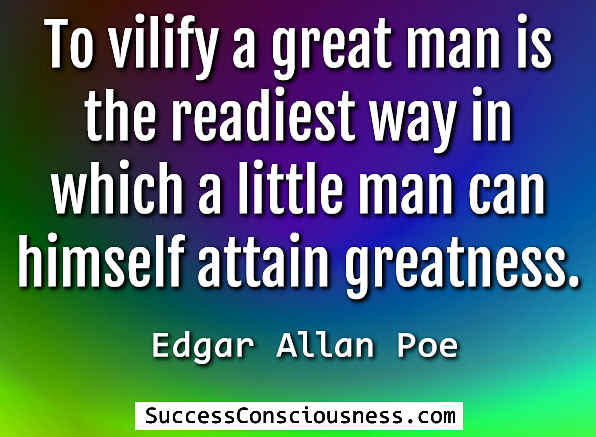 “To vilify a great man is the readiest way in which a little man can himself attain greatness.”

“Beauty of whatever kind, in its supreme development, invariably excites the sensitive soul to tears.”

“The boundaries which divide Life from Death are at best shadowy and vague. Who shall say where the one ends, and where the other begins?”

“There are some secrets which do not permit themselves to be told.”

“The realities of the world affected me as visions, and as visions only, while the wild ideas of the land of dreams became, in turn, not the material of my everyday existence but in very deed that existence utterly and solely in itself.”

Read the quotes, imbibe their wisdom and implement their advice.

“I remained too much inside my head and ended up losing my mind.”

“I have great faith in fools; self-confidence my friends call it.”

“We gave the Future to the winds, and slumbered tranquilly in the Present, weaving the dull world around us into dreams.” 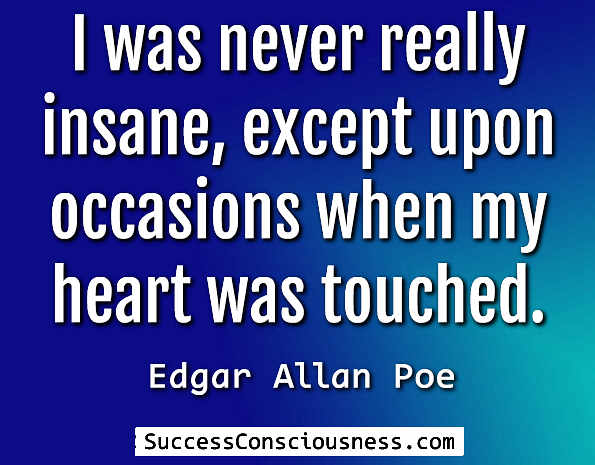 “I was never really insane, except upon occasions when my heart was touched.”

“In criticism I will be bold, and as sternly, absolutely just with friend and foe. From this purpose nothing shall turn me.”

“To elevate the soul, poetry is necessary.”

“To observe attentively is to remember distinctly.” –Edgar Allan Poe

“There is no exquisite beauty without some strangeness in the proportion.”

“Mysteries force a man to think, and so injure his health.”

“Invisible things are the only realities.”

“There are chords in the hearts of the most reckless which cannot be touched without emotion.”

“We should bear in mind that, in general, it is the object of our newspapers rather to create a sensation – to make a point – than to further the cause of truth.”

Additional quotes about life and about dreams.

“I intend to put up with nothing that I can put down.”

“When, indeed, men speak of Beauty, they mean, precisely, not a quality, as is supposed, but an effect – they refer, in short, just to that intense and pure elevation of soul – not of intellect, or of heart.”

“Either the memory of past bliss is the anguish of to-day; or the agonies which are have their origins in ecstasies which might have been.”

“Where the good and the bad and the worst and the best have gone to their eternal rest.”

“Oh what a tangled web we weave when first we practice to deceive.”

“Convinced myself, I seek not to convince.”

“Men have called me mad, but the question is not yet settled, whether madness is or is not the loftiest intelligence.”

“The true genius shudders at incompleteness — imperfection — and usually prefers silence to saying the something which is not everything that should be said.”

“Poetry is the rhythmical creation of beauty in words.”

“Deep into that darkness peering, long I stood there, wondering, fearing, doubting, dreaming dreams no mortal ever dared to dream before.”

“All that we see and seem is but a dream within a dream.”

Once upon a midnight dreary, while I pondered, weak and weary,
Over many a quaint and curious volume of forgotten lore –
While I nodded, nearly napping, suddenly there came a tapping,
As of some one gently rapping, rapping at my chamber door.
‘Tis some visitor,’ I muttered, ‘tapping at my chamber door –
Only this and nothing more.’

Ah, distinctly I remember it was in the bleak December;
And each separate dying ember wrought its ghost upon the floor.
Eagerly I wished the morrow; — vainly I had sought to borrow
From my books surcease of sorrow — sorrow for the lost Lenore —
For the rare and radiant maiden whom the angels name Lenore —
Nameless here for evermore.

If you enjoy mystery and thought provoking ideas, you will enjoy reading Edgar Allan Poe stories, poems and quotes. Some of his stories are ‘The Black Cat’, ‘The Fall of the House of Usher’, ‘The Cask of Amontillado’, ‘The Pit and the Pendulum’ and there are many more.