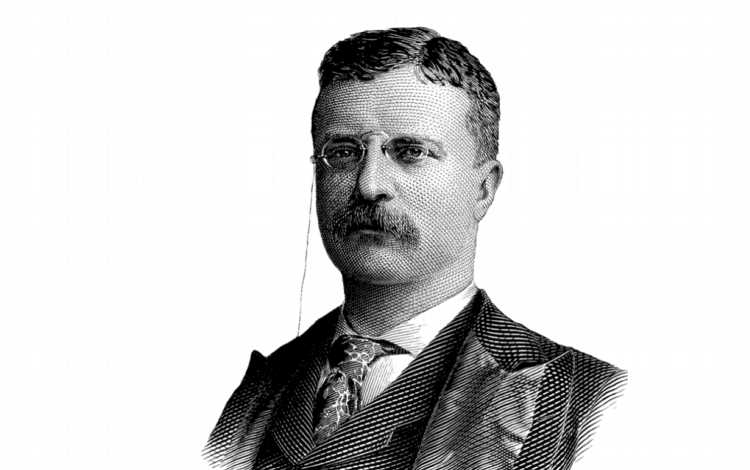 Theodore Roosevelt quotes about success, leadership, life and other topics.

Roosevelt was an American statesman and writer, who served from 1901 to 1909 as the 26th President of the United States.

Theodore Roosevelt was born in New York City in 1858, and grew up to become an influential politician and conservationist.

In 1901, while at the young age of 42, Theodore Roosevelt was elected as president of the United States of America.

Roosevelt is ranked as one of the five best presidents.

Here are Theodore Roosevelt quotes and words, to help you get inspired and follow your dreams.

“Great thoughts speak only to the thoughtful mind, but great actions speak to all mankind.”

“The boy who is going to make a great man must not make up his mind merely to overcome a thousand obstacles, but to win in spite of a thousand repulses and defeats.”

“I am a part of everything that I have read.”

“Unless a man is master of his soul, all other kinds of mastery amount to little.”

“I don’t pity any man who does hard work worth doing. I admire him. I pity the creature who does not work, at whichever end of the social scale he may regard himself as being.”

“Keep your eyes on the stars, and your feet on the ground.”

“With self-discipline most anything is possible.”

“Big jobs usually go to the men who prove their ability to outgrow small ones.”

“When you play, play hard; when you work, don’t play at all.”

“Far and away the best prize that life has to offer is the chance to work hard at work worth doing.”

“Freedom from effort in the present merely means that there has been effort stored up in the past.”

“People ask the difference between a leader and a boss. The leader leads, and the boss drives.”

“The best executive is one who has sense enough to pick good people to do what he wants done, and self-restraint enough to keep from meddling with them while they do it.”

“If we are really to be a great nation, we must not merely talk; we must act big.”

“It is not the critic who counts; not the man who points out how the strong man stumbles, or where the doer of deeds could have done them better. The credit belongs to the man who is actually in the arena, whose face is marred by dust and sweat and blood, who strives valiantly.”

“Our chief usefulness to humanity rests on our combining power with high purpose. Power undirected by high purpose spells calamity, and high purpose by itself is utterly useless if the power to put it into effect is lacking.”

“Old age is like everything else. To make a success of it, you’ve got to start young.”

“Do what you can, with what you have, where you are.”

“When you are asked if you can do a job, tell ’em, ‘Certainly I can!’ Then get busy and find out how to do it.”

“We want men who fix their eyes on the stars, but who will not forget that their feet must walk on the ground.”

“Far better is it to dare mighty things, to win glorious triumphs, even though checked by failure than to rank with those poor spirits who neither enjoy much nor suffer much, because they live in a grey twilight that knows not victory nor defeat.”

“No man should receive a dollar unless that dollar has been fairly earned.”

Theodore Roosevelt Quotes on Life and on Behavior

“There were all kinds of things I was afraid of at first, ranging from grizzly bears to ‘mean’ horses and gun-fighters; but by acting as if I was not afraid I gradually ceased to be afraid.”

“Washington’s career shows that we need to keep our faces steadily toward the sun. You can change the simile, to keep our eyes to the stars, but remember that our feet have got to be on the ground.”

“We must remember not to judge any public servant by any one act, and especially should we beware of attacking the men who are merely the occasions and not the cause of disaster.”

“It is better to try great things, even at the risk of failure, then to know neither victory nor defeat.”

“Courtesy is as much a mark of a gentleman as courage.”

“The credit belongs to the man who is actually in the arena, whose face is marred by dust and sweat and blood; who strives valiantly; who errs, who comes short again and again, because there is no effort without error and shortcoming.”

“All the resources we need are in the mind.”

“Order without liberty and liberty without order are equally destructive.”

“I have never in my life envied a human being who led an easy life.”

“I think there is only one quality worse than hardness of heart and that is softness of head.”

“The most important single ingredient in the formula of success is knowing how to get along with people.”

“Democracy to be successful, must mean self-knowledge, and above all, self-mastery.”

“Nine-tenths of wisdom is being wise in time.”

“There has never yet been a man in our history who led a life of ease whose name is worth remembering.”

“There are many qualities which we need in order to gain success, but the three above all—for the lack of which no brilliancy and no genius can atone—are Courage, Honesty and Common Sense.”

Information about Theodore Roosevelt and his life.