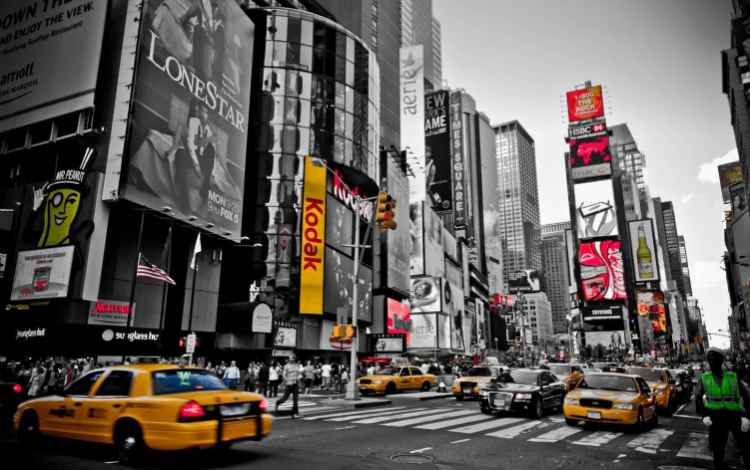 It is an amazing city, where you can find almost everything you seek.

New York is called the Big Apple. What is the origin of this name?

“The Big Apple” is a nickname for New York City. It was first popularized in the 1920s by John J. Fitz Gerald, a sports writer for the New York Morning Telegraph. Its popularity since the 1970s is due in part to a promotional campaign by the New York tourist authorities (Wikipedia).

Here are some famous New York quotes and some less famous ones, from writers, actors, singers, and people who love New York.

“When I’m in New York, I just want to walk down the street and feel this thing, like I’m in a movie.” – Ryan Adams 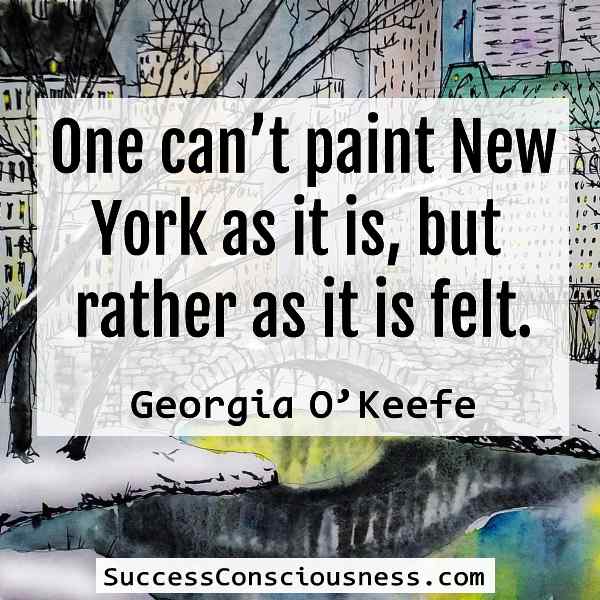 “One can’t paint New York as it is, but rather as it is felt.” – Georgia O’Keefe

“New York is made up of millions of different people, and they all come here looking for something.” – Lindsey Kelk

“I didn’t know the city at all, but I was so happy to be in New York I cried. I was so excited.” – Greta Gerwig

“I would give the greatest sunset in the world for one sight of New York’s skyline.” – Ayn Rand

“New York is the meeting place of the peoples, the only city where you can hardly find a typical American.” – Djuna Barnes 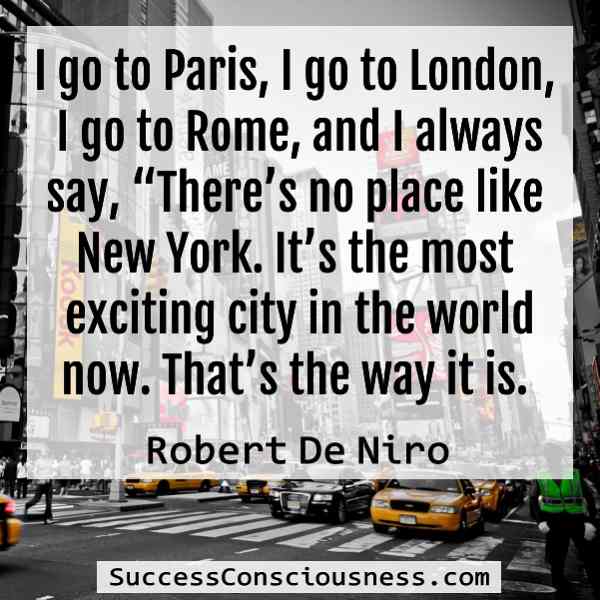 “I go to Paris, I go to London, I go to Rome, and I always say, “There’s no place like New York. It’s the most exciting city in the world now. That’s the way it is. That’s it.” – Robert De Niro

“One belongs to New York instantly, one belongs to it as much in five minutes as in five years.” – Thomas Wolfe 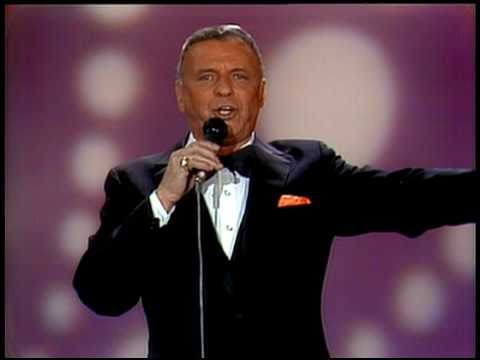 “Practically everybody in New York has half a mind to write a book, and does.” – Groucho Marx

“I realized the other day that I’ve lived in New York longer than I’ve lived anywhere else. It’s amazing: I am a New Yorker. It’s strange; I never thought I would be.” – David Bowie

“I feel about New York as a child whose father is a bank robber. Not perfect, but I still love him.” – Woody Allen

“If you want to become a real New Yorker, there’s only one rule: You have to believe New York is, has been, and always will be the greatest city on earth. The center of the universe.” – Ellen R. Shapiro

“There is something about big cities that turns me on, and for whatever mysterious reason, places like New York and Paris inspire me. I think it’s because cities represent civilization, and as crime-ridden and broken down as some of them are, it’s still better than skipping through a meadow.” – Woody Allen 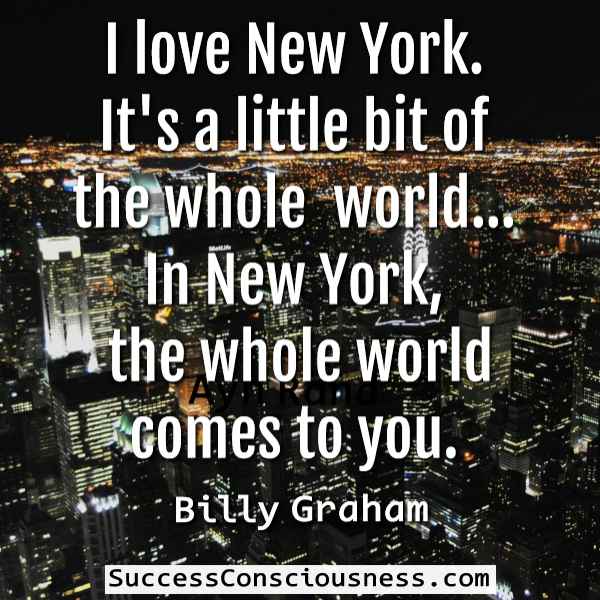 “I loved New York, but I never quite felt like New York was my home either.” – Sutton Foster

“New York, without a doubt, is my favorite city in the world.” – Linus Roache

“I love New York. It is an amazing city, and the U.S. Open is a lot about the show. There are tens of thousands of spectators; these are some of the best courts in the world, and there is nothing like being here and making memories.” – Stan Wawrinka

“People think New York is this big city where no one knows each other, but when you live in the Village, it’s the opposite.” – Nigel Barker

“Over the last few years, NYC has staunchly maintained its welcoming spirit and also made exciting cultural strides forward by giving a voice to many who have in the past been voiceless. It’s an electrifying time for those of us who live in the city of Lady Liberty.” – Will Gleason

“New York has magnificent eating available, both in restaurants and in the materials available to home cooks in the many specialty markets.” – Steve Albini 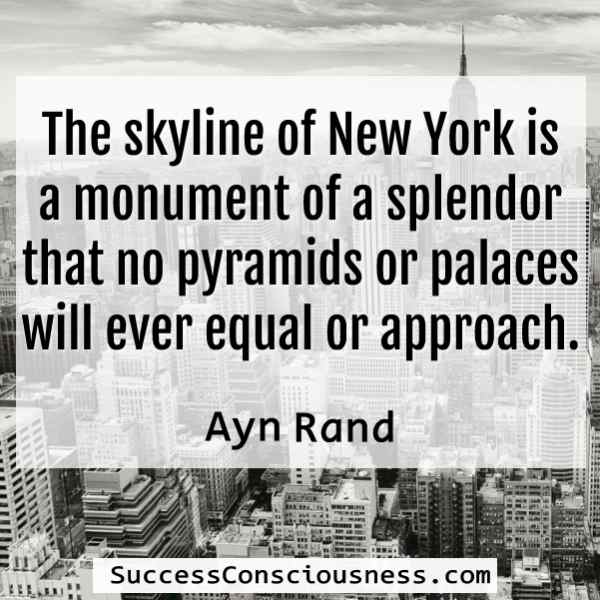 “The skyline of New York is a monument of a splendor that no pyramids or palaces will ever equal or approach.” – Ayn Rand

“Quite simply, I was in love with New York. I do not mean “love” in any colloquial way, I mean that I was in love with the city, the way you love the first person who ever touches you and you never love anyone quite that way again.” – Joan Didion

“I get out of the taxi and it’s probably the only city which in reality looks better than on the postcards, New York.” – Milos Forman

“I look out the window and I see the lights and the skyline and the people on the street rushing around looking for action, love, and the world’s greatest chocolate chip cookie, and my heart does a little dance.” – Nora Ephron

“Cut off as I am, it is inevitable that I should sometimes feel like a shadow walking in a shadowy world. When this happens I ask to be taken to New York City. Always I return home weary but I have the comforting certainty that mankind is real flesh and I myself am not a dream.” – Helen Keller 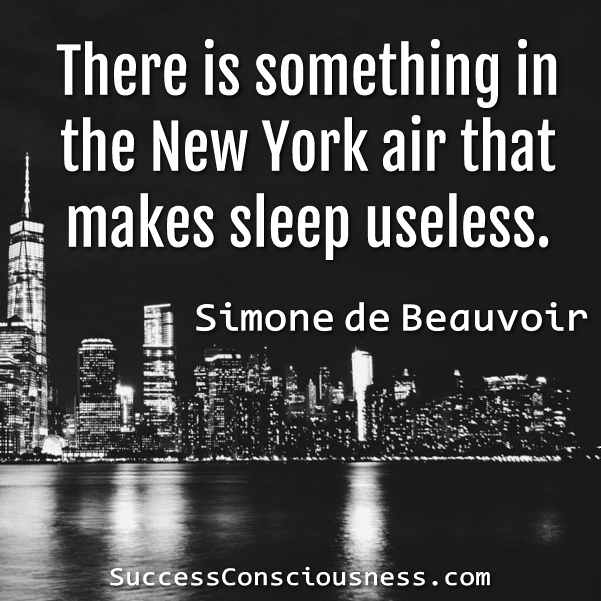 “There is something in the New York air that makes sleep useless.” – Simone de Beauvoir

“New York is an ugly city, a dirty city. Its climate is a scandal, its politics are used to frighten children, its traffic is madness, its competition is murderous. But there is one thing about it: Once you have lived in New York and it has become your home, no place else is good enough.” – John Steinbeck

“New York City is a great monument to the power of money and greed… a race for rent.” – Frank Lloyd Wright

“I believe in New Yorkers. Whether they’ve ever questioned the dream in which they live, I wouldn’t know, because I won’t ever dare ask that question.” – Dylan Thomas

“Make your mark in New York and you are a made man.” – Mark Twain

“When you leave New York, you are astonished at how clean the rest of the world is. Clean is not enough.” – Fran Lebowitz

“New York is my home and I have a particular fondness for it. I think it’s a place where you can generate any kind of story wonderfully. But I also would be very happy to make a film in Paris or Rome.” – Woody Allen

“One’s life and passion may be elsewhere, but New York is where you prove if what you think in theory makes sense in life.” – Miuccia Prada 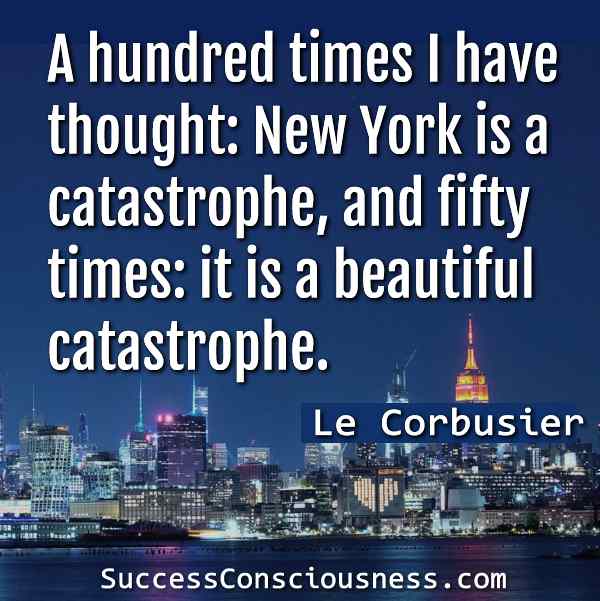 “A hundred times I have thought: New York is a catastrophe, and fifty times: it is a beautiful catastrophe.” – Le Corbusier

“New York is so full of the best unemployed actors on the planet.” – Rachel McAdams

“New York is something awful, something monstrous. I like to walk the streets, lost, but I recognize that New York is the world’s greatest lie. New York is Senegal with machines.” – Federico Garcia Lorca

“The city seen from the Queensboro Bridge is always the city seen for the first time, in its first wild promise of all the mystery and beauty in the world.” – F. Scott Fitzgerald

“London is satisfied, Paris is resigned, but New York is always hopeful. Always it believes that something good is about to come off, and it must hurry to meet it.” – Dorothy Parker

“My favorite thing about New York is the people, because I think they’re misunderstood. I don’t think people realize how kind New York people are.” – Bill Murray

“This is the city of dreamers and time and again it’s the place where the greatest dream of all, the American dream, has been tested and has triumphed.” – Michael Bloomberg

“I love short trips to New York; to me it is the finest three-day town on earth.” – James Cameron

“Kids from New York usually don’t stay in New York anymore: they go to prep schools and all sorts of stuff nowadays. I’m just happy to be one of the guys in our league from New York, to represent.” – Kemba Walker

“New York was a city where you could be frozen to death in the midst of a busy street and nobody would notice.” – Bob Dylan

“A middle finger is more New York than a corporate ambush. I bleed for my hometown, and I’d die for my fans.” – Lady Gaga

“New York City is one of the greatest places on the planet. You have the best in food, art, theatre, and definitely people-watching.” – Matt Bomer

I love New York, even though it isn’t mine, the way something has to be, a tree or a street or a house, something, anyway, that belongs to me because I belong to it.”
— Truman Capote